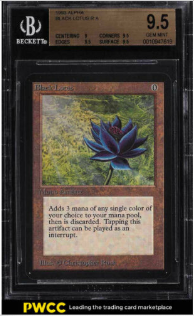 According to the news, it seems that “Black Lotus”, a representative of expensive cards at “Magic The Gathering”, was traded at 166,100$.

Even if it is an expensive and rare card, I will investigate various things to see that 166,100$. are too high for drift. By the way, I play MTG, but I do not have this card.

The card traded this time is a set card called alpha version released in August 1993. There are other beta versions, unlimited versions of “Black Lotus” themselves, but the “color of the frame is black” and “the four corners are rounded” are only the alpha version and the rarity is high.

The alpha version has a total of 2.6 million cards printed, but “Black Lotus” has a rarity classification of “rare”, it seems that only 20,000 copies are printed.

In addition, this card is a beautiful item with few scratches, rated at 9.5 out of 10. Since it is natural that a card is wounded as it is, it becomes a valuable item that may exist only one in the world if it becomes a card 25 years ago.

Also, it is decided that some cards including “Black Lotus” will be “not re-released” as “re-record prohibited cards”. For that reason, it is also a card that is decided to hang the price every time.

The reason for raising the value of “Black Lotus” is the beauty of the illustrations. There are many cards that are evaluated as being beautiful in addition to MTG cards, and the preferences of illustrations differ depending on the individual’s hobby and can not be said to be the best one. However, it is definitely beautiful that the black lotus flower and the background illustration of green are beautiful.

強力な能力を持っている ／ Have a strong ability

However, because of its strength, it is said that it is “breaking the balance of the game”, so it is forbidden to use it excluding some games. This point seems to have lowered the value of this card somewhat.

For the above reasons it is deemed that there is a very high value, but some collectors will “wish to get it”, and it seems that there are rich people feeling that “166,100$ is cheap” Absolute evaluation can not be done because it is.

Finally, I think that I will end with introducing “open videos” of the strong luck owner who gave out this expensive card. Thank you for reading.