【木下大サーカス】サーカスを見に行った話 ／ A story I went to see the circus 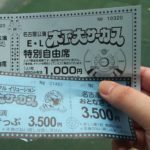 I went to see the performances of the Kinoshita Circus at Shirakawa Park in Nagoya City. It was a photo taken from the front of the venue, though people were being cut off. It features a tiger sign.

As photography was prohibited in the hall and was not able to be taken, only photograph is this. There was an announcement that it was good to shoot during the finale, but the timing was not clear. Finally it was while the circus performer came out and greeted? I was so excited to watch at the show, so I didn’t care about taking photos.

The contents of the program (link) on the official page are listed. Some of the items are different but enough to remember. The white lion’s art was great, but there was no tiger. Why is the signboard a tiger?

The force that I saw was that it was like playing a handstand while turning around with a large wheel, playing a blinding technique with a swing on the air swing, and doing a roller skate with a pair of men and women like a super-class Haou electric bullet It is a technique of rotating at high speed sideways (I have attached a reference video because it is difficult to express). I think that the excitement of this area can not be understood without seeing it directly. I will do Nagoya performances until 6/10.